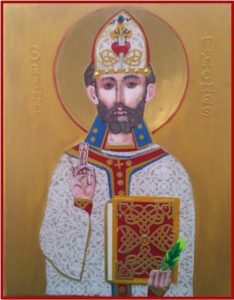 St. Thomas of Canterbury Episcopal Community is named for the sixth Archbishop of Canterbury (after the Norman Conquest). He is venerated both by the Anglican Communion and the Roman Catholic Church. His life story is a fascinating one worthy of further research. Here is a brief biography:

Thomas Becket (Thomas of Canterbury) was born around 1118 to a wealthy family in Cheapside, London, on 21 December, the feast day of St Thomas the Apostle. He was the son of Gilbert and Matilda Beket. His talents were noticed by the then Archbishop of Canterbury, Theobold. (At that time, the Archbishop of Canterbury was one of the most powerful men in England, after the King.) After successfully taking part in missions to Rome, he was noticed by King Henry II who appointed Thomas Becket to be his Chancellor. Becket quickly became a favourite of Henry II. Thomas was loyal, dedicated and very talented in managing the nation’s finances. As chancellor, he always put the King’s interests first.

In 1164, Henry II summoned Beckett to Northampton Castle to answer charges of ‘contempt of royal authority and malfeasance in the Chancellor’s office’. Beckett was furious and fled to France. In France, Beckett was offered protection by King Louis VII of France, giving Beckett shelter in the Cistercian abbey of Pontigny. Henry issued edicts against Beckett and his friends, however, Henry II was unhappy to lose his skilled administrator and old friend. With the intervention of Pope Alexander III, Henry agreed to a reconciliation and compromise that would allow Beckett to return to England without facing charges

In 1170, Thomas Becket returned to England. However, Thomas returned only to further irritate Henry II by continuing to assert the rights of the Church and the papacy.

According to tradition, Henry II flew into a rage and uttered ‘Who will rid me of this meddlesome priest?” On hearing this, supporters loyal to the King murdered Thomas Becket in Canterbury Cathedral – stabbing him with a sword.

The King later showed great remorse on the death of Thomas Becket and even undertook public penance at his shrine.

Miracles were soon reported at Becket’s tomb and he was canonized by the Pope very quickly – three years after his death in 1173. His fame spread across Europe and his shrine became one of the most visited places of pilgrimage. The shrine stood until it was destroyed in 1538, during Henry VIII’s dissolution of the monasteries.

Today in its place at Canterbury Cathedral stands a small memorial and candle.

His feast day is 29 December although he is often commemorated on the Feast of the Holy Trinity, the date of his consecration as Archbishop of Canterbury. 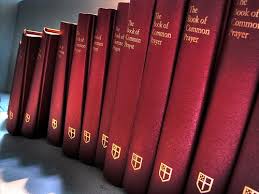 In this era of quarantine and pandemic, in person community is difficult to achieve. For now it’s best to be safely at home and to gather as a parish family in a different way.

Join us on Facebook as we live stream, or via Youtube a little later in the day.

When you join us for liturgy, have a Book of Common Prayer in front of you.